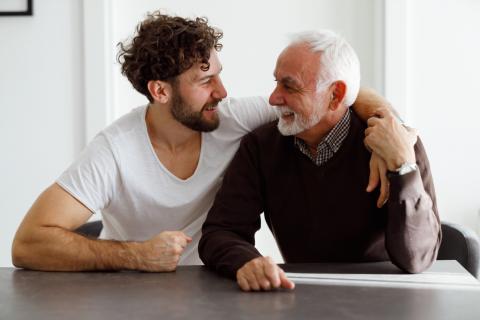 How are men in the U.S. doing when it comes to serving as role models for the health of their children? A recent study from Ohio State University showed that a lot of dads and granddads need to step up their game! Sociology doctoral student Alexandra Kissling, who is now a research associate at the University of Maryland, studied the ways that parents influence the health of their children. She interviewed a group of adults, many of whom reported that while their moms were a positive influence on their health, their dads mainly served as role models—of what not to do!

Many dads in the study were “cautionary tales,” Kissling reported. “Adults in our study sometimes talked about how they were affected by their fathers having really poor health behaviors, like smoking or heavy drinking. They really wanted to make sure they didn’t make the same mistakes.”

Fortunately, many participants in the study whose fathers and father figures set a bad example were able to learn from it. For example, said Kissling, “People discussed fathers’ and fathers-in-laws’ addiction to alcohol and drugs as negative health examples, which encouraged them to make healthier life choices during their adulthood.”

The above findings certainly don’t apply to all dads, of course! Many fathers diligently model healthy behaviors for their children and grandchildren and are actively involved in their health care. Studies show that young fathers today are even more likely to play this role.

And of course, it goes both ways. Father’s Day is a great time to talk to dads, spouses, and grandfathers about their health, and to encourage them to take steps to improve it. Need some ideas of what to talk about while the grill is heating up for the Father’s Day cookout? How about…

Nutrition. What’s on that grill, anyway? If it’s fatty red meat, and that’s a staple food for Dad, suggest varying the menu by cooking up some veggies or fish. Maybe Dad’s meal plan could use a makeover, with more whole grains and healthier fats, and less salt and processed foods.

Health appointments and screenings. Studies show men are less likely to have regular checkups, screenings, and immunizations. Encourage Dad to talk to his doctor about screenings for heart health, hypertension, diabetes, prostate health, colon, and other cancers. He should have regular dental, vision, hearing, and memory screenings also, and a bone density test—men get osteoporosis, too.

Exercise. The American Heart Association recently noted that exercise improves the heart health and energy levels of older men—whereas those popular and widely sold testosterone supplements do not. Help Dad find activities he enjoys that provide aerobic, strengthening, and stretching exercises. When you visit, go for a walk with Dad rather than watching TV.

Alcohol and smoking. Beer is likely to be on that Father’s Day menu, but drinking too much raises Dad’s risk of heart disease, cancer, diabetes, and even Alzheimer’s disease. This can be a sensitive subject, but be open to the conversation. And if Dad smokes, chances are you’ve already nagged him about it. Continue to offer encouragement if he wants to quit, even if he’s tried before. For a little extra incentive, show him this calculator from Smokefree.gov that demonstrates how much money he’ll save if he quits.

Safety. Does Dad need a reminder about wearing his seat belt and driving safely? Could his home use some safety upgrades, such as repairs and improved lighting? Is he safe during the sports he enjoys? Falls and other injuries could threaten his independence—and that’s not something he would want.

You won’t want to spring all these topics on Dad at the same time, of course! But even if he resists talking about these things, he will most likely appreciate your concern.

And who knows? He may have some health-related information to share with you, as well. Taking care of our health is a family affair, making it more likely we’ll enjoy many more Father’s Day gatherings in the future.

Source: IlluminAge with information from Ohio State University
Back to Blog