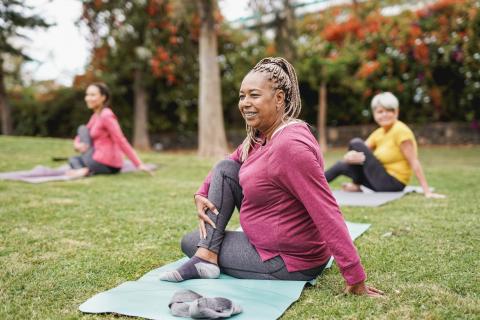 Insights from Finland About Senior Independence and Exercise

Mobility can decline so gradually that older adults don’t notice. University of Jyväskylä professor Urho Kujala looked at 45 years of data from a group of twins, and found that the activity level of both twins was similar when they were younger—but if one twin later experienced a chronic condition such as heart disease, diabetes and arthritis, that twin would slowly become less active in the community. Kujala recommends adaptive, individualized exercise programs for older adults. “Exercise therapies tailored to the type of disease can significantly improve individuals’ physical functioning, mobility and possibilities for independent living,” he said.

Modified exercise routines promote independence in seniors with mobility challenges. When an older adult needs to use a walker or cane, walks more slowly, covers less ground, and stops for periodic rests, this means they are getting a lower-intensity workout. But a study by researcher Heidi Skantz showed that these are good modifications, as opposed to “maladaptive modifications,” such as giving up exercise entirely. “Older people who used maladaptive walking modifications had smaller life-space mobility and they perceived that they lacked possibilities for outdoor mobility,” said Skantz. “As for those older people who had chosen to utilize adaptive walking modifications, they were able to maintain wider life-space mobility.” Skantz recommends that communities create senior-friendly public spaces that, for example, include more places elders can rest.

Older adults are motivated by outdoor exercise. Two studies by researcher Kirsi Keskinen found that no matter their physical condition, older adults were more likely to be active outdoors. But preferences differ between city dwellers and rural elders. “In densely populated areas, destinations close to nature were associated with older adults’ brisk physical activity,” said Keskinen. “Yet in sparsely populated areas, features that improved pedestrian infrastructure close to home were important for reporting higher levels of physical activity. Peaceful walkways, even sidewalks, and street lighting are examples of features that make an environment more walking friendly for older adults.”

Exercise slows bone loss after hip fracture. Hip fracture robs many older adults of their independence. It begins with the loss of muscle strength. “A strong relationship exists between bone and muscle. A low level of physical function may prevent effective loading of the bones and could be related to reduced bone-loading physical activity,” said study author Tuuli Suominen. Suominen says that seniors who have suffered a hip fracture—as well as those who have not—should pay more attention to exercise, as well as diet and a fall prevention program.

After menopause, exercise protects strength and independence. As the level of estrogen drops during menopause, women experience a loss of muscle mass. Study author Hanna-Kaarina Juppi looked at the medical records of a thousand women from the Jyväskylä area, and found that decrease in muscle mass begins early in the menopausal transition. But frailty isn’t inevitable. “Women should be sure to get enough exercise,” said Juppi. “Physical activity was found to be positively associated with the maintenance of muscle mass during the menopausal transition. Women who were more active had higher muscle mass before and after menopause compared to the less active women. It seems that even though menopause alone decreases muscle mass, staying physically active throughout middle age can help women to slow the change.”

Source: IlluminAge AgeWise, with information from the Gerontology Research Center, Faculty of Sport and Health Sciences at the University of Jyväskylä, Finland.
Back to Blog