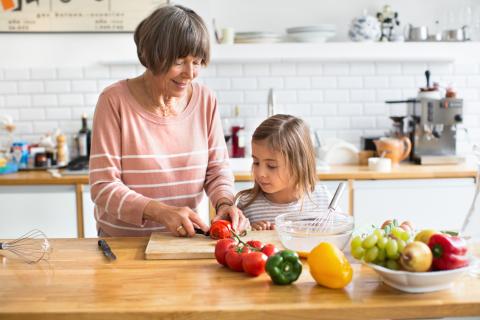 6 Ways to Model Good Health for the Grandkids

Despite the ageist stereotype that older adults are a “burden,” anthropologists agree that living in social groups that included older members was a major reason the human species has been so successful. The experts say that for our Stone Age ancestors, the presence of supportive older relatives, equipped with years of wisdom and providing an extra set of hands, gave children a survival advantage.

Things really haven’t changed that much. Today the wisdom of grandparents and great-grandparents is more valuable than ever. They help grandchildren learn and grow and thrive in many ways—and providing a role model for healthy living is at the top of the list.

We know that good health tends to run in families. That is partly due to genes, but genes are only part of the effect. Studies show non-biological children, too, can share certain health conditions, such as obesity and high blood pressure, with adoptive parents from whom they’ve “inherited” bad health habits.

September 11 is Grandparents Day—a great time for grandparents to think about serving as healthy role models. Let the grandkids and other children in your life see you engaging in these healthy pursuits:

Exercise—It’s not your imagination that even before the pandemic, kids were getting less exercise these days. Encourage grandchildren to put down their devices and go to the playground with you, or walk the dog. If your health permits, plan a hike or camping trip. Were you planning to take your granddaughter shopping for school clothes? Go to an in-person store rather than ordering online, if it’s safe.

Eating well—Busy parents may not have time to prepare meals from scratch—but Grandma’s home cooking is a different matter. Take grandkids along to the grocery store or farmers market to select fresh ingredients for a nutritious repast. Teach them to read food labels, and let them help you prepare the meal. Do you garden? If grandkids help tend and harvest those growing veggies, they’ll be far more likely to eat them.

Give your brain a workout—Studies confirm that a lifetime of mental stimulation builds cognitive reserve that can delay the symptoms of dementia later on. Music and languages are especially protective; offer to pay for your grandchild’s music lessons, and maybe the two of you could learn a new language together. Take them to museums and performances, in person, or virtually if that’s safer. It’s never too early to develop a rich life of the mind, and never too late to reap the benefits.

Quit smoking—You probably know that secondhand smoke is harmful for children, so maybe you don’t light up when they’re around—but did you know that thirdhand smoke, which is the harmful residue that builds up on carpets and furniture where people smoke, is also dangerous? While fewer young people today are taking up the habit, having a family member who smokes has been shown to raise their risk of being a smoker. This is one legacy you certainly don’t want to leave!

Practice healthy habits—Let the grandkids see you washing your hands before cooking and after using the bathroom. Always wear your seatbelt in the car. If the little ones are sleeping over, establish a nighttime tooth brushing ritual as a lead-in to bedtime stories. And kids need vaccines to protect against a number of dangerous diseases. Few children eagerly look forward to getting a shot, but knowing that Grandpa gets his can help them put on a brave face. And these days, the COVID vaccines make it safer for all the generations to be together.

Model positive aging. Did you know that young people who have a negative opinion about older people are less likely to be healthy later in life? Let your grandkids see the joys of being older, and how worthwhile it is to address any challenges you’re dealing with. Share your hobbies, your thoughts, funny stories about days gone by. And avoid ageist jokes; they really aren’t funny.

By now you’ve probably noticed that this article has a hidden agenda: Performing these healthy rituals supports your own good health, as well. It’s a win-win that might give you more years to spend with those precious grandchildren and great-grandchildren … and will make it more likely that they, in turn, will model good health for the generations to come.

Source: IlluminAge AgeWise
Back to Blog