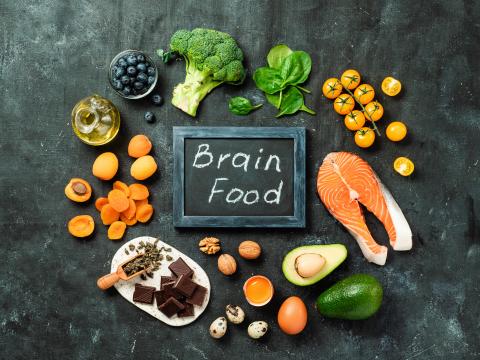 Which Foods Are Good for Brain Health?

Then there are nutrition “experts” who make a lot of money on YouTube channels touting “miracle diets” with claims like “eat this superfood every day to avoid Alzheimer’s.” But are those claims true? For most of us, brain health is a high priority—but we might despair at knowing what foods we should eat more of, and which we should avoid.

Fortunately, plenty of legitimate science exists to guide us in selecting foods that are good for the brain. For example, a January 2022 study published by the American Academy of Neurology showed that people who consume foods containing a type of antioxidant called flavonol are less likely to develop Alzheimer’s disease in their later years.

Foods rich in flavonol include olive oil; tea; nuts; veggies and greens such as tomatoes, kale, spinach and broccoli; herbs such as fresh dill, oregano, parsley and tarragon; and fruits, such as pears, apples, blueberries and oranges. Different types of flavonol are found in various foods, so a varied diet is best.

“More research is needed to confirm these results, but these are promising findings,” said study author Dr. Thomas M. Holland of Rush University in Chicago. “Eating more fruits and vegetables and drinking more tea could be a fairly inexpensive and easy way for people to help stave off Alzheimer’s dementia. With the elderly population increasing worldwide, any decrease in the number of people with this devastating disease, or even delaying it for a few years, could have an enormous benefit on public health.”

Getting these nutrients from foods rather than from a supplement is best, and doing so also provides us with other beneficial micronutrients, fiber and healthy fats. The National Institute on Aging (NIA) reports that the well-known Mediterranean diet and similar eating patterns have been linked with brain health. Brain-protecting benefits of these diets include:

The NIA says that a good diet for brain health focuses on plant-based foods, and is based on these healthy food groups:

Of course, there are foods to avoid, as well—saturated fats, especially trans fat; added salt and sugar; refined carbohydrates; processed foods; large amounts of red meat; and excess alcohol (though a small amount may be beneficial).

And here’s what the NIA has to say about supplements, such as DHA, gingko biloba and vitamins: “At this time, no vitamin or supplement is recommended for preventing Alzheimer’s or cognitive decline. Although widely available from drugstores and on the internet, many of these have not been tested for their effects on thinking. Their safety and effectiveness are largely unknown, and they may interact with other medications.”

More studies are underway to learn more about foods that are good for the brain. Talk to your doctor about an eating plan that’s right for you.

Source: IlluminAge AgeWise with information from the American Academy of Neurology and the National Institute on Aging
Back to Blog