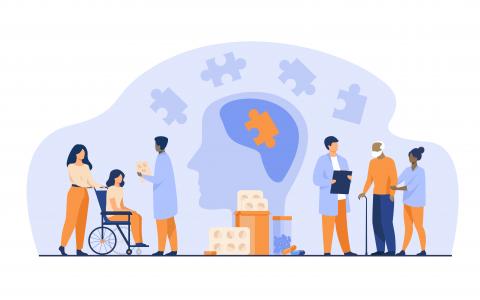 There are two types of LBD: dementia with Lewy bodies and Parkinson’s disease dementia. The outward signs of these two types are different, but the biological changes in the brain are the same. The disease lasts an average of 5 to 7 years between the time of diagnosis to death, but this varies greatly from person to person.

The causes and risk factors of LBD are not fully understood; neurologists believe that age is the greatest risk factor, while genetics, lifestyle and other health conditions may also be involved.

What are the symptoms of LBD?

In the earliest stages of LBD, symptoms can be mild, and patients usually experience little change in function. The first noticeable changes are similar to those of a person with Alzheimer’s disease. But over time, other symptoms suggest the diagnosis of LBD. The NINDS says these include:

In Parkinson’ disease dementia, the other type of LBD, symptoms begin with slowed movement, muscle stiffness, tremor, and a shuffling walk, and thinking problems and behavior changes arise later.

How is LBD diagnosed?

As mentioned above, LBD can be hard to diagnose because diagnosis is based on symptoms, and the early symptoms are very similar to those of Alzheimer’s disease and other conditions. Blood tests and brain scans are useful mainly to rule out other disorders. Family members can be of help, sharing observations about changes in their loved one.

Can LBD be treated?

At present, LBD cannot be prevented or cured, but some symptoms may respond to treatment for a period of time. A neurologist who specializes in the condition can make these recommendations. Physical therapists, speech therapists, occupational therapists and other professionals can also be important members of the care team.

The NINDS stresses that creating the best possible quality of life for people with LBD is a central goal of treatment and care:

Get support from family, friends and professionals. People with LBD will need help with tasks such as managing medications, paying bills, preparing meals and transportation. Care may be provided at home, with the help of professional caregivers or an adult day center. Moving to a supported senior living community also may be the best choice.

Create a safe living environment. Reduce the risk of falls by removing clutter, improving lighting, and installing grab bars in the bathroom. Stairs may be modified with ramps.

Plan for the future. Work with an elder law attorney, a financial planner and an aging life care professional (geriatric care manager) to locate resources and benefits to which the person might be entitled.

Focus on quality of life. People with LBD can still enjoy moments of tenderness, humor and pleasure in life. With modifications, they can continue to enjoy favorite activities. There are activity programs geared for people who are living with dementia, as well as support groups for people with LBD. Today many of these are meeting virtually.

As their loved one’s condition progresses, family find themselves taking on more and more care tasks. Experts caution that these people who do so much for their loved one might put themselves at risk of physical and emotional fatigue, which can lead to sleep problems, depression and other illnesses. But caregivers do not have to face these tasks and responsibilities alone. Many sources of help are available. The NINDS recommends these steps:

Educate others about LBD. Most people are unfamiliar with LBD. Be open and share information with family, friends, even medical personnel. Ask your loved one’s neurologist to suggest resources.

Care for yourself. Take time for yourself. Respite care can be provided at home, in an adult day program, or in a senior living community. Accept help when it’s offered—and learn to ask for help from friends, relatives and government support services. Be open about the situation; according to NINDS, “Family members who visit occasionally may not see the symptoms that primary caregivers see daily and may underestimate or minimize your responsibilities or stress.”

Work with a counselor. “Not all family members may understand or accept the diagnosis of LBD at the same time, and this can create conflict,” NINDS reports. “Some adult children may deny that parents have a problem, while others may be supportive. It can take a while to learn new roles and responsibilities.” Family counseling can help, and personal counseling helps family caregivers cope with the changes in their loved one and in their role as caregiver.

The information in this article is not intended to replace the advice of your health care provider. Talk to your doctor if you have concerns about changes in your own or a loved one’s thinking and behavior.

Source: IlluminAge AgeWise with information from the National Institute on Neurological Disorders and Stroke.
Back to Blog